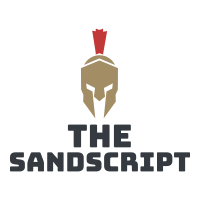 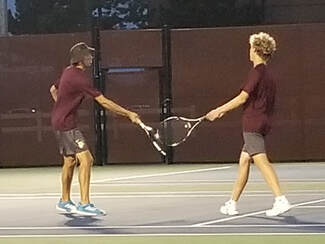 Chesterton hasn’t hit a ball as a team since last Saturday because of the day off from Labor Day and Tuesday’s rain-out of Merrillville.
Heading into a match against the defending DAC champions without much practice in the days leading up to it, could be a challenge for the Trojans.
Under the lights at Crown Point’s tennis complex, Chesterton held off a very competitive opponent and walked away with a impressive 4-1 win. The win puts Chesterton at 3-0 overall & 2-0 in DAC play.
The top two singles spots would put Chesterton up 2-0 early as Fabio Haiduc (#1) and Drake Redman (#2) both won in straight sets.
Senior Troy Feller fought off a late-run from his opponent at #3 singles, winning his match 6-2, 7-5 and giving Chesterton that clinching 3rd team point.
“I was impressed with the singles guys tonight on how they each seemed to dictate better in their matches and withstand any momentum their opponents threw at them,” said Head Coach Tom Bour.
The match of the night came at #2 doubles where John Petro & David Archbald needed three sets, but came out on top by a score of 6-4, 5-7, 6-4.  At 2-3 in the third set, Petro & Archbald grab momentum back after they won two games in a row to make it 4-3.  They would not give up the lead after that and the win put a 4th team point on the board for Chesterton.
“It was nice to see #2 Doubles play with some energy and intensity,” said Bour. “Both our doubles teams have to do a better job at the net and take care of their service games, but tonight we saw flashes of great doubles.”
Crown Point’s lone point came at the #1 doubles position as John Powell & Brock Redman fell in three sets by the score of 5-7, 6-4, 2-6.
The Trojan’s JV only managed 3 wins Wednesday night as Crown Point’s JV tallied 7 wins.
Senior Danny Vear won a marathon match at the top-singles-spot 1-4, 4-1, 11-9.  At #2 singles, Connor Potesta also won a marathon match with his score being 1-4, 5-3, 10-7.   Alex Henderson dropped his match at #3 in straight sets and the #1 doubles team of Connor Engels & Ian Condes had to default their match due to an Engels illness.
Chesterton’s 3rd team point came from the #2 doubles team of Cole Snyder & Gavin Rivera who won 4-1, 5-3.   Grant Flesher & Mark Jewison lost a close one at #3 as they forced a tiebreaker, but would come up short 6-7 (2-7).   Also getting edge out by a tiebreaker was the #4 team of Sam Slutzkin & Adam Royster who lost 6-7 (1-7).
Max Haughtington & Jai Barath lost in straight sets at #5 and the team of Paul Scott & CJ Adent lost 2-6 at #6 doubles.  Payton Whalen & Ben Van Wagner fell in straight sets at #7.
It doesn’t get any easier for the Trojans as they host Valparaiso Thursday at 430pm.